TL;DR – When running appliances that require promiscuous mode it’s advised to place the appliance in the DFW exclusion list, especially if the appliance is a security hardened virtual appliance

Last year I was working with a customer that had rolled out NSX to implement micro-segmentation. This customer is a mid-sized customer that is integrating NSX into their existing production vSphere environment. The customer had decided to implement security policy based on higher level abstractions i.e. security groups but also decided they need security policy enforced everywhere, using the Applied To column set to Distributed Firewall. Not an ideal implementation but perhaps that discussion is for another blog post

The environment being a brownfield environment, the customer wanted to implement security policy to the existing virtual appliances. They were using F5 virtual appliance for load balancing and had specific requirements to configure promiscuous mode on the F5 port group to support VLAN groups(https://support.f5.com/kb/en-us/products/big-ip_ltm/releasenotes/product/relnotes_ltm_ve_10_2_1.html)

Long story short, by configuring the F5 port groups in promiscuous mode they were facing intermittent packet drops across the environment. We were quickly able to identify that the workloads impacted were the workloads that resided on the host that had the F5 virtual appliances. As we could not power off the appliance we decided to place the F5 appliance in an exclusion list and like magic, everything returned to normal, no packet drops.

Well now that we understood what was causing the issue but as with all things we needed to understand why this behaviour was seen. We started by picking a virtual machine on the F5 host and turned up logging on the rule that allowed traffic for a particular service, in this case, SSH. We also added a tag to that rule so we could filter the logs.

Note: You can get the filter hash for a virtual machine by running vsipioctl getfilters. Each vNIC gets a filter hash

Looking at the output of vsipioctl getfilters we identified that the duplicate filter (53210) belonged to the F5 virtual appliance.

We also captured packets at the switchport of the virtual machine and we see 10.68.145.170 sending a SYN/ACK back to the client, this packet was also seen on both filters. The subsequent frame shows the client immediately sending a RST packet to close the connection. This was a bit strange as the firewall rule allows this traffic and there was no other reason why the client would immediately send a RST packet

Why would traffic be hitting a different rule when the initial SYN was evaluated by rule 1795 ??

Having identified this, we provided the customer with a couple of options to mitigate the issue.

I hope you found this article to be as interesting as this issue was to me.Until next time !! 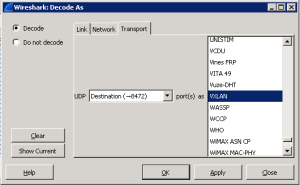 I was recently involved in a NSX deployment where the ESX hosts (VTEPs) were not able to communicate with each other. The NSX manager UI showed that few ESX hosts in the cluster were not prepared even though the entire cluster was prepared. We quickly took a look at the ESX hosts and found that the VXLAN vmk interfaces were missing but the VIBs were still installed. Re-preparing these hosts failed with no IP addresses available in the VTEP IP pool.

So to remove an IP address from the pool we first need to find the pool-id. Using a Rest client run this GET request to get the pool-id

The output would list all the configured IP pools. We need to look at the objectId tag to get the pool-id. Once we have the pool-id we can query the pool to verify the start and end of the IP pool

To remove an IP address from this pool use the Delete method along with IP address like so,

Note: With this method you can only remove IP addresses that have been allocated and not free addresses in the pool.

Recently we were working on an issue were VXLAN Transport Multicast traffic was not being passed on the upstream physical switches causing an outage for the virtual machines that were hosted on these virtual wires.

Some Background on the environment:

Upon further investigation it was revealed that IGMPv3 join’s were being received by the physical switch and since the physical switch had IGMPv2 enabled it pruned and ignored the IGMPv3 joins. So to resolve the issue, IGMPv3 was enabled on the upstream switches and the ESX hosts were able to join their multicast groups and the virtual machines were reachable on the network.

Starting with ESX 5.5, the default IGMP version on the ESX host has been changed to v3. This option is configurable and can be reverted to IGMPv2 using the ESX advanced settings,

Hope this helps someone that run’s into a similar issue.

To isolate if this issue was something specific to the Linux guest I moved all the 3 virtual machines (2 Linux machines and the NSX Edge) to the same ESX host and restarted the networking service. The machine was assigned an IP address of the configured DHCP scope and was able to ping its gateway. So there is nothing wrong with the TCP/IP stack in the guest since network traffic on the same ESX hosts never traverses the external network and is in done in memory.

Digging a litte deeper: The arcane world of log analysis

Bringing out the geek in me and to start digging further I started trawling through the vmkernel logs on the ESX host to see what happens when the virtual machine powers up, i.e. Does it connect to the virtual port…

The above log snip tracks the power on task for the virtual machine(org2-rhel2) and its quite evident from the last line that the control plane connection is down. These Internal networks use VXLAN as their underlying transport and since VXLAN uses a controller in Unicast mode the next thing to check would be if the ESX hosts can communicate with the NSX controller.
On the ESX host using the esxcli command we can query the VDS for VXLAN configuration.

Immediately noticed the the connection to the controller was down

ESX hosts establishes a connection to the NSX controller using a user world daemon. The netcpa.log shows communication with the controller and also the updates that are pushed from the controller down to the ESX hosts. Looking at these logs its clear that the connection is down.

To isolate further on comparing the MAC addresses for the controller IP’s it was found the the controllers IP had been assigned to another machine on the network. After shutting down the machine and restarting the netcpa agent the ESX hosts was able to re-establish a connection with the controller.

While this issue may be quite simple and something that happens most of the time in a large network, I hope you found the approach to the problem useful. Feedback welcome!!